Jason Richey drove the InsideSuperRacing.com/CSRC 1963 Corvette roaster to his first victory of the season at North Star Dragway in Denton, TX this past weekend.  Competing in the Inaugural Sportsman Showdown, Jason captured the Super Gas victory over a red-lighting David Jones.  “The car ran dead-on the 6.20 index 3 out of the 4 rounds, and would have done it in the 2nd round, but I lifted.  I was just lucky to be the one driving this weekend.  The car is running amazing as of late, and I’m just happy to get the win.  My dad has won twice on the IHRA divisional trail already this year, so it’s nice to get one in my column finally.” 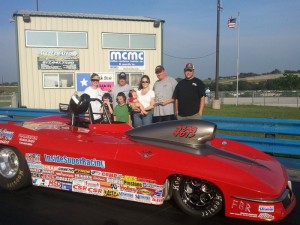